Autobiography of a Yogi

in How To Be A Better Human, Magickal Girl, My Weird Adventures, Spiritual Development, Things I love

Wow, I’ve just discovered that drinking a can of Mother energy drink during the day helps me write. I just typed five journal articles for my academic supervisor, as part of my publishing internship. Here’s an excerpt from one:

“The editor liked my idea for an article about ‘How to Bend Time’. In my very informal email proposal I wrote: “I could investigate different spiritual traditions’ concepts of time, talk to spiritual practitioners and find out if they use any meditation or other techniques to seemingly warp time (by getting things done within a seemingly miraculous time period). I’ve used a few meditation techniques myself occasionally to good effect, so I’d love to investigate this phenomenon further”.

She replied that it sounded  interesting, and asked me if I’d read Autobiography of a Yogi by Paramanha Yoganada.  Apparently there are examples of time manipulation in this book.  She also suggested I look into Kriya Yoga, and pointed me in the direction of the international Self-Realization Fellowship to see if I could find someone to possibly interview.

I’d heard about Autobiography of a Yogi from several friends who read it and raved about it. I once had a home visitor who said they’d been awake reading the book all night because it was so interesting.  I’d also heard stories over the years about enlightened yogis who supposedly transcended time and space with their advanced spiritual techniques. Another couple of my friends told me of an acquaintance who visited an ashram in India, and supposedly witnessed some guru guy manifest a diamond out of thin air in the palm of their hand.

Those friends had also made reference to Autobiography of a Yogi. So this was one of those books that I kept hearing about over the years, and had mentally placed on my “books to read” list, but hadn’t yet gotten around to reading it. So when the editor mentioned this book in relation to the article I was writing, I decided that I needed to get off my butt and read it now.

I checked online and at several locations the book retailed for about $40. (I’d also previously seen it for sale for about that amount in new age shops).  So, being the broke, unemployed  uni student that I am, I trawled the internet for a free online version of the book, and eagerly started reading. The book was fascinating! Pretty soon my eyes were hurting from staring at my computer screen, so I put in a petition to the universe to find me a hard copy, since I still prefer to read books in actual book form.

A couple of days later, while visiting my doctor, I walked through the shopping centre and felt a sudden urge to visit the bookshop there. I’d been in that bookshop many times previously, and I knew the kinds of books they stocked there (the mainstream kind). I’d seen every book they stocked in their tiny spiritual & new age section because it was always the first place I went to whenever I visited the bookstore. A wrestling match with my intuition ensued:

“Check the bookshop while you’re here, they have the book!”

“No way, they wouldn’t have it. I’ve seen the books they usually stock there and I’ve never seen it there before. Besides, I’m running late for the train”.

“But I have more chance of finding it in a larger bookstore in the city, like Borders or Dymocks. And I have a train to catch”.

“But…. Okay, I may as well, since I don’t come to this side of town very often…”

So I walked back down to the bookshop and asked the first staff member I saw if they had Autobiography of a Yogi. I was totally shocked when they said yes! The salesperson had just placed it on the shelf literally moments before. They said they don’t normally stock it, but a customer ordered it in then failed to pick it up. And it was only $28! I couldn’t believe my luck. I bought the book and walked out of there in a daze. I love how the universe works!” 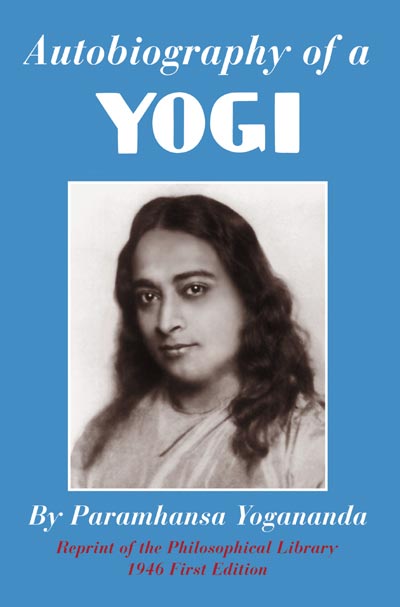