An Ode to The Mysterious Cities of Gold

One of the greatest cartoons (and memorable cartoon theme songs) of all time. It’s South American history and archaeology, mixed with science fiction!

Estaban is a young Spanish orphan who was saved from a ship wreck at sea.  The only clue to his origins is a strange medallion around his neck. He is taken to the new world of the Americas by Mendoza- a navigator on a ship in the Spanish armada. Along the way he befriends Zia, a girl who was kidnapped from an Incan village, as well as Tao, who is the last remaining descendant of the advanced civilisation of Hiva. The children get caught up in a series of awesome adventures as they hide from the gold-obsessed Spaniards, explore their origins, and search for the legendary Cities of Gold! 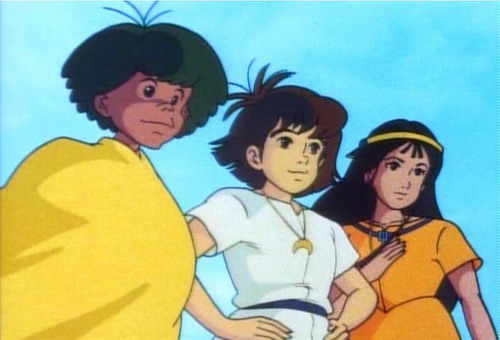 “It is the 16th Century. From all over Europe great ships sail west to  conquer the New World – the Americas. The men eager to seek their fortune, to find new adventure in new lands. They long to cross uncharted seas and discover unknown countries, to find secret gold on a mountain  trail high in the Andes. They dream of following the path of the setting sun,  that leads to Eldorado, and the Mysterious Cities of Gold” (From the opening credits).

While growing up in the 80’s, this was my favourite TV show (yes, more so than Ulysses 31). At an early age, it instilled in me a fascination for the cultures of the ancient Americas. I’d sometimes disappear for hours into the rainforest near my home, on my own secret quest to find the Cities of Gold! I really, really also wanted a giant, golden Condor-plane. As a child fascinated with the Incas, my desire for this fantasy transportation device was replaced only by the hover board from Back to the Future 2. (Hmm…I sense a flying theme here).

Fun fact: The show was originally a French and Japanese production for French TV, known as Les Mystérieuses Cités d’Or. The story is based on the book The King’s Fifth by Scott O’Dell.