Star Trek Into the Darkness Teaser!

My first Look at the trailer for the  new Star Trek movie!
(…In which I overanalyse it like a Trekkie fangirl, then show off my Karl Urban autographs)

I think I just peed myself a little…

The first movie trailer for Star Trek: Into the Darkness was recently released online. And it’s EPIC!

Earlier in the week I saw this poster, which features a mysterious guy in a badass-looking leather jacket, standing atop the fiery rubble of what appears to be one of Earth’s major cities.

And look- the hole in the rubble is in the shape of a classic Starfleet Insignia. Ooooh…so much symbology right there. 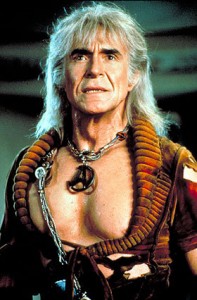 The Internet is abuzz with rumours of who the new bad guy could be. IMDB.com says it could possibly be Kahn- the “genetically engineered superhuman tyrant who once controlled more than a quarter of the Earth during the Eugenics Wars of the 1990s” Khan was first introduced during the 60’s Star Trek episode Space Seed, but he’s more famous for his reappearance as the main bad guy in the legendary film Star Trek 2: The Wrath of Khan. (KHHAAAAANNN!!!!! …couldn’t resist sorry).

Other sources however, say it’s more likely to be Garry Mitchell- Kirk’s old Starfleet buddy who developed psychokinetic superpowers and a seriously bad God-complex in the original series episode Where No man has gone before.

Karl Urban (who plays Dr. Bones McCoy in the new movie) may have accidentally let the cat out of the bag at the end of a lengthy press interview recently. According to SFX magazine, when Karl was asked about Cumberbatch’s upcoming role in the new Star Trek film, he said-

“He’s awesome, he’s a great addition, and I think his Gary Mitchell is going to be exemplary.”

In response to the slipup he later said, “I’m really not at liberty to discuss anything about Star Trek. All I can say is that I did that interview after a 22-hour flight from New Zealand. I literally hopped off the plane into the interview.”

You can’t unsay that Karl! 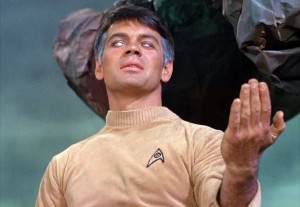 Poor, sleepy Karl Urban and his accidental leaking of secret movie stuff, which is probably against his contract. I hope ol’ JJ wasn’t too upset with him. Then again, he could have let it slip deliberately as part of a carefully planned, viral marketing-buzz campaign. Who knows?!

So far, all we really know about this mysterious bad guy is…

* He’s got a grudge against Kirk, and Starfleet, and is back for revenge
* He has a badass sense of fashion
* He’s being played by Benedict Cumberbatch, star of TV series Sherlock 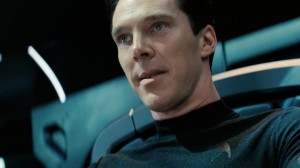 * Cumberbatch replaced actor Benicio Del Toro, who was originally attached to the role. There were early rumours (from the Latino Review) that Del Toro would be playing Khan, but director JJ Abrams flat-out denied them.
* He’s shown in one scene with a big-ass- looking alien weapon… Presumably, if he had God-like telekinetic superpowers (as in Garry Mitchell) he wouldn’t need the weapon?

* His steely eyes and short hair somewhat resemble the original Gary Mitchell from T.O.S. (the Original Series)
* The film also features a sexy blonde in a blue Starfleet Science & Medical uniform (played by Alice Eve), who Kirk appears to be flirting with in one scene (Classic Kirl ;p) Trekkie rumours are, that if Cumberbatch is playing Gary Mitchell, then it would also make sense that Alice Eve would likely be playing the ship’s psychiatrist Dr. Elizabeth Dehner, who became Gary Mitchell’s partner-in-crime in Where No Man Has Gone Before.

So, in my humble, non-professional opinion, I vote for the bad guy being Gary Mitchell. I think that would be awesome. Also- I am more partial to believing the rants of Karl Urban, because he’s pretty – I met him once- and he said he likes my fairy wings. (See below photos for proof ;p) 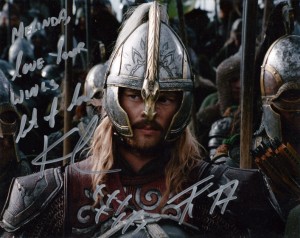 By the way, if you wanna see something else really cool, the Japanese teaser has extra scenes in it which *gasp* appear to be paying homage to Spock’s demise in
Star Trek 2: The Wrath of Khan!

I will now return to finishing my next Supanova convention report… Let’s get this sucker finished by Christmas!…