You can’t do epic shit with basic people

in How To Be A Better Human, MoonChild Mondays, Spiritual Development

Throughout my life I seem to always end up on the side of the lesser- understood. I have a great curiosity for studying different ideas which most people would never bother to learn about, or could believe anyway. I’m a dreamer, an artist, and an optimist. (Sometimes I’m called other things too!)

But I’m fascinated by life’s mysteries, and I seek to explore the unknown and lesser-studied aspects of life.

Despite what anyone says- to follow any path-less-trodden takes great courage, and sometimes sacrifice.

But is this not the point of being human- to learn from everything in life- both present, past, & possible future- and to use that wisdom to help make the world a more positive place both in the present and for future generations? 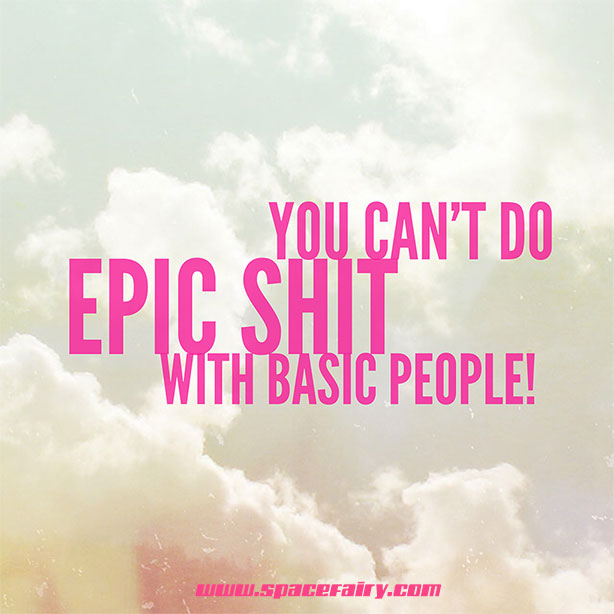 Some people are shallow surface-dwellers, who never bother to go further than the tip of their own noses. To those who delve deeper into the mysteries of life they would scorn and judge, or maybe even call crazy. And they are allowed to do that- but its inconsequential to the one who is firmly and proudly following their own path in life.

A shallow/basic person could never understand what the mystical or open-minded sees- not because they are incapable of it- but because they chose not to (or they don’t know how). After all, most have never thought any other way.

I have always been deeply spiritual- but not always religious (I don’t believe the two are mutually exclusive and I think most organised religion has a LOT of bad shit to answer for- not always because of the ideas & philosophies, but because of the individuals charged with carrying those ideas out and skewing them to spread evil or fear-based philosophies rather than of love- which is the very opposite of fear and hate).

And I am not so close-minded to think that humans currently have all the answers in life (really- we know absolutely nothing in comparison to what is out there. We don’t know what we don’t know. Some of us need to check our ego baggage and practice a little humility once in a while).

There is sacred knowledge and natural wisdoms which need to be studied, applied, and passed onto future generations, for our species to be one that’s worth saving (-by this I mean not blowing ourselves up or destroying our planet for example- I’m not talking about being worthy of receiving help from a magical saviour-figure… I’m talking about not ending up like the cringe-worthy future humans in the movie ‘Idiocrasy’)  -and the basic-minded people amongst us are not the ones to do it.

I’m not saying they aren’t cool- (some of them are my friends!) They serve their function in keeping  modern society in its present form running, and in the short-term, society can’t function without them and their day-to-day proficiencies. But we need more than that if we’re gonna survive as a species on this planet. Yes- there is so much more to life that most people are willing to admit or believe is possible.

If you have ever felt a subtle nagging emptiness inside because you suspect that there must be more to your life- it’s because you are right. And if you take the time out to listen to what’s deep inside yourself rather than drowning it out with external media and endless shallow distractions in life, this expanded universe within you will become obvious… then maybe you’ll start to see through the surface bullshit that’s constantly being shoved in our faces, and come to know the truth of what is really real. (Here’s a hint: No-one can tell you…you have to figure it out & experience it for yourself. Such is the beauty of life).