On suddenly moving to a new state, and the power of wild decision-making

Once you make a decision, the Universe conspires to make it happen. – Ralph Waldo Emerson 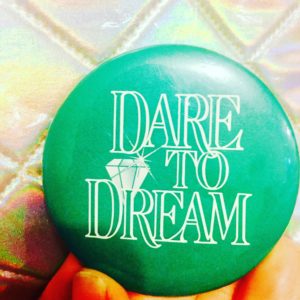 About 15 years ago I made the sudden decision to move from Canberra to Brisbane QLD, despite having no money saved and not not knowing a single soul there. I just knew in my heart it was the right move, and nothing would stop me!

For a couple of years prior I had lived in Canberra where I was stuck after a significant relationship had ended. I was depressed, broke, stuck in an unfulfilling retail job and also really cold (I have bad circulation so I literally cried through each long, icy Winter).

In 2013 I had the opportunity to volunteer as a helper at spiritual author Doreen Virtue’s second ‘Angel Intuitive’ course in Brisbane, after graduating from her very first class (in Sydney) the previous year. It was my very first visit to ‘The Sunshine State’. 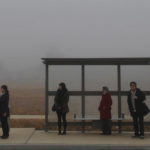 The morning I left was freezing. I wore about 5 layers of clothes including my knee-high leather boots and long black leather jacket (I was a closet-goth in those days, but it suited the cold weather well!) and even then I still stood shivering and miserable, waiting for the bus to the airport.

A couple of hours later I stepped off the plane in Brisbane, into an entirely new world…the weather was a beautiful, sunny 34 degrees C (even in September!) I ditched my long black leathers for a bikini and went swimming almost immediately! I was genuinely surprised at how happy and friendly even total strangers were there. (I guess it’s hard to feel miserable when it’s warm and sunny and you’re surrounded by palm trees!) While in the pool I met a new friend who offered to buy me ice-cream and we sat on the beach geeking out over the SciFi shows it turned out we both liked. Brisbane was awesome! 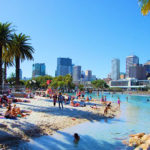 My beloved Southbank in Brisbane

The Angel Intuitive course that weekend was once again life-changing… my chakras were aligned, my psychic senses were opened, my energies had been shifted once more and I was positively “vibed up” and all ready for a new life filled with new adventures and positive new friends.

On the plane ride back, while flying into Canberra, my heart sank as I saw the snow on the mountains and the pilot announced that the weather outside was currently minus-4 degrees c. That was when I vowed to get the hell out of Canberra (where I had been nothing but miserable) and return to sunny Brisbane as soon as I could!

I was suddenly offered extra shifts at work, friends offered to buy my furniture for higher than its market value, my favourite airline suddenly had a sale on flights to Brisbane, and even my previously estranged ex-fiance started being nice again and showed up at the last minute to help. Mum offered to help pay for my own private room at a nice backpacker’s until I could find a more permanent place to live (I ended up living in a lovely house with a local artist from Quebac). Everything worked out perfectly, and in perfect timing.

Moving to Brisbane was one of the best life choices I ever made! So many friends and precious memories over the years (as well as the occasional tears, but hey it was still mostly good). 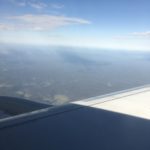 My view from the plane… new adventures await!

I encountered similar assistance at the start of the year, when I made the sudden decision to move back to Sydney, after being accepted into one of the best Fashion Design schools in the country (it was recently voted 23rd best fashion design program in the world!). The school had conveniently lost my application, so after a last minute phone interview and quick glance of my portfolio (which I’d hurriedly scanned and emailed in) I was accepted into the program a week before classes were due to start (This is also how long I had to pack, and find a new place to live in another state!)

Until I flew down here -with nothing but my two suitcases- I still didn’t know where I would stay after the first couple of nights let alone how I would find the money to survive in coming weeks. And still no idea how I would pack up my Brisbane apartment and get the rest of my belongings to Sydney with no money! But I knew that this was going to be my next great adventure and that if it was meant to be, then the universe would help make it happen and support me on this journey.

As luck had it, I somehow randomly connected with my old childhood friend and neighbour, who I hadn’t seen in about 20 years… one night she realised that she needed a housemate, and the next night she randomly saw my plea for assistance on Facebook. I needed an affordable place to stay  where I could temporarily live rent-free until I could move all my stuff down from Brisbane and find a replacement for my room there. (Rent free in Sydney? Surely an impossible dream?!) But faith prevailed and everything ended up working out perfectly for me, in perfect timing!

And where I had been genuinely concerned about being able to afford to rent there (-in a city whose idea of affordable student accommodation is strangers sharing a room- ) I now live in a whole house with only my one awesome housemate, in a beautiful, quiet leafy neighbourhood that’s close to everything. I have adequate space for all my stuff as well as a second room for my sewing studio- for less than I paid in Brisbane. Honestly, miracles do happen!!!

Never underestimate the unexpected miracles that can happen when you follow your heart and take a leap of faith… if you believe, and follow the signs, the universe will conspire to help you in unexpected ways. It’s a thing which always happens when you’re aligned with the Laws of Attraction.