Up-sides to not showing up “on time”

in Guide to Better Humaning, How To Be A Better Human, My Weird Adventures, Random Funness

Whoever thought it was a good idea for everyone to start and finish work at the same time needs to be slapped. Think about it- this is why traffic is a thing. I’m fairly sure that in this age of telecommuting, new technologies, and changing ideas around work that this should be a thing of the past soon- a quaint note in history books as a leftover momento of the old Industrial Era.

The thing is- when you dare to play outside the rules of usual time constraints, sometimes beautiful things happen, and you get opportunities you might have otherwise missed.

One bonus to showing up late, for example, is that you may actually get a seat on the train for a change. Or if you drive, it may only take you half as long to get there because you didn’t waste a valuable hour of your life sitting in bumper-to-bumper traffic. Therefore in the long run you would be less stressed and could actually get more done!

People who blindly play by the rules seldom see these little upsides. But if you’re always strictly doing things by the book you can miss out on some pretty fun stuff!

One day I was “running late” my timing was actually so exquisite that I accidentally found myself on a movie set during filming! 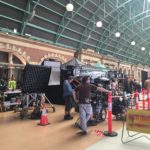 An unusual sight at the train station 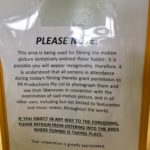 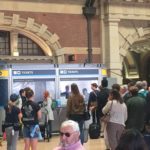 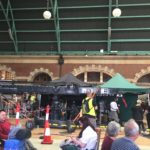 Running late has also resulted in some delicious free treats from the promotions people at the train station, who don’t start work until after my classes start… (Not photographed: Various free chocolate samples which I nommed immediately before taking photos. Yay free chocolate!) 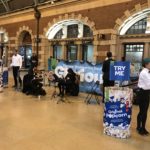 Yes I will try your delicious free samples 🙂 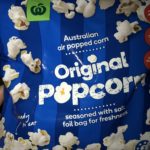 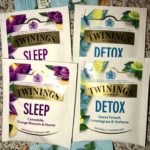 But perhaps more importantly, almost every time I’ve run late late for a uni class, I’ve ended up actually being more productive by getting a seat on the train which meant I could use my laptop to work on stuff. (Any of the earlier trains to the city from where I currently live result in standing room only for a whole hour- what a waste of time!)

As for what we may tell our future grandchildren… “I remember a time when everyone was encouraged to do everything the same, at the same time, in the name of productivity. And if you didn’t fit into this limited mould of sameness and doing everything at the same time as everyone else then it was really difficult to make a living.”

Our grandchildren would be like- “that’s absurd! Everyone has their own biorhythms, skills, abilities and ideal work patterns which make them the most effective. How can anyone be encouraged to be the best version of themselves possible- and thus to do their best work possible- if they are forced into a strict mould of other people’s choosing without any thought to the individual’s true wellbeing?”

And we’d reply, “back in the days when making money and profit was the number one consideration in society, maintaining rigid systems based on the old idea of the Ford-Factory-Line of car making was considered a most efficient means of working. A cookie-cutter-like approach to working meant that systems and resources could easily be duplicated and better controlled. Everything could be counted, there would be less waste, and thus higher profits could be made”.

“But what about the emotional and energetic wellbeing of the individuals involved?”

“Well this was also a time in history where stress-induced illnesses were prevalent, and there was an epidemic of prescribed anti-depressant use. So generally speaking, most of those people weren’t very happy!”

“That’s crazy, why would people choose to live like that?”

“Well they didn’t really have much of a choice until new technologies such as the Internet came along, and people slowly realised there were a lot more options for making a living… and thus the concept of a 9-5 cookie-cutter job slowly became a thing of the past…”